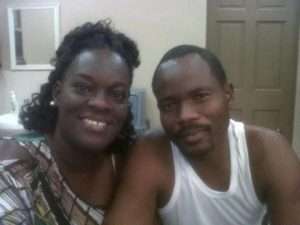 Trinidadexpress.com – A security officer who admitted that he slapped his wife over an uncooked meal was on Monday jailed for 12 months with hard labour.

Police prosecutor Cleyon Seedan told the court that at 6.30 p.m. on Sunday, the victim was at their Diamond Village home when she and Thomas had an argument over an uncooked meal and also over a bag containing her personal belongings.

He dealt his wife lashes about her body. She was also slapped to the right side of her face causing injuries.

A report was made to the police and the husband and wife were met at the house. Hollice Thomas, 36, was taken for treatment at hospital.

A medical report from the San Fernando General Hospital showed she suffered bruising and swelling to her right cheek, a laceration to her inner bottom lip, bruising and tenderness and blunt trauma to her head which caused headaches.

The charge was laid by constable Mungal.

Thomas told the court that they had “a little argument” which got physical. “It was something that was piling up a long while … I apologize,” he said.

His wife, a Guyanese national, described Thomas as a “Puncheon drinker” and said such incidents happened when he drank.

She said they had a three year old son and during Sunday’s incident she and the child were chased with a chopper and went by a neighbour.

Thomas said he did into always behave in such a manner. Chankar told him “Once is too much.”

Thomas who was charged in the past with attempted murder but said the case was dismissed after the alleged victim did not want to give evidence, was sentenced him to 12 months hard labour.

Hollice Thomas said it was not the first time she made a report against her husband to the police. She said last year she went to the San Fernando police station and spoke to a female police officer. “I told her I was being abused and I was fearful.” Thomas said while the report was taken, nothing came out of it.

Seedan explained that the procedure is that all reports should be recorded and should be investigated and based on that investigation and its merit, the proffering of the charge is done.