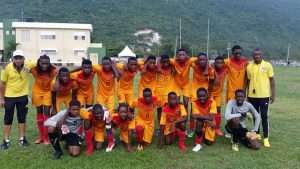 The Grenada Football Association (GFA) named its 20-man squad to represent Grenada in the Confederation of North, Central America and Caribbean Association Football (Concacaf) U-17 Boys Championship at the IMG Academy in Bradenton Florida USA.

The U17 Spice Boyz who has been in training over the past year leaves the Country on Wednesday 13 and Thursday 14 March 2019.

The 2019 edition of the Under-17 Championship, in Bradenton, Florida, will be disputed in three rounds. The first-round qualifiers will take place March 16-24 (Groups A and C) and April 1-9 (Groups B and D), while the Final Championship (Groups E, F, G, H and knockout stage) will take place May 1-16.

After the round-robin play, the top three finishers in each of the groups will qualify for the knockout stage, joining the four group winners of the Qualification Stage in the Round of 16.

The knockout stage of the competition will be played in its entirety in a single match elimination format, with the semifinalists automatically qualifying for the FIFA U-17 World Cup Peru.

The team is being coached by Curt Rennie and Assisted by Gerald Alexander.