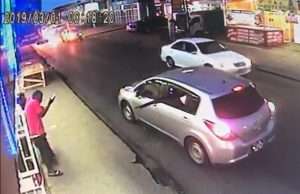 Trinidadexpress.com – POLICE have little to go on except CCTV footage that captured the murders of two men in Couva on Carnival Friday.

The Nissan Tiida carrying the back seat killer bore false licence plates, when it pulled up along the busy Southern Main Road on March 1.

Daniel Renaldo Bute who was a known drug offender was the target of the shooter who used a 16 gauge shotgun.

Homicide detectives believe that t Bute was a casualty of the war between narcotics dealers in Couva.

Three shots were fired at Bute, but two men were killed.

Henson Roni Bruzual who had just purchased a meal for his wife and two children was about to enter his wife’s boutique when he too was shot.

In his dying moments Bruzual pushed his daughter and son into the shop, and they were unharmed.

The shotgun catridge pierced his neck and he died on the floor.

Bute was taken to the Couva District Health Centre where he died.

Bruzual was born in Venezuela but had migrated to Trinidad with his family when he was an infant.

His wife Sandy said that he was a devoted father and husband, who had recently started a job as a scaffolder.

She said they kept the boutique open that evening for late shoppers, since they had bills to pay.

Their daughter is expected to write the Secondary Entrance Assessment next month.

The shooting occurred around 6.40 p.m. when the streets were filled with commuters and limers.