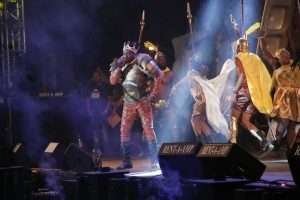 The Government of Grenada is planning a grand motorcade and celebration event on Saturday, March 9, in honour of the artistes returning from successful performances at the International Soca Monarch in Trinidad and Tobago.

The artistes will be welcomed by Government officials in a brief ceremony at the Maurice Bishop International Airport.

This will be immediately followed by a grand motorcade, starting at the airport, that will make stops in the four parishes which are home to the artistes.

In St. David, stops will be made at the Police Station, La Tante and Crochu; in St. Andrew, the motorcade will stop in Grenville, Paradise Junction and Tivoli. On the western side of the island, the first stop will be at Heroes Square in St. Mark, followed by two stops in St. John, the first of which will be on the Lance in Gouyave.

The motorcade culminates at Cuthbert Peters Park and will be followed by a brief ceremony featuring remarks from the Parliamentary Representative for St. John, Hon Alvin DaBreo and Minister for Youth Development, Honourable Kate Lewis. This will be followed by performances from all of the artistes who participated in the International Soca Monarch last Friday.

Saturday’s event is intended to recognise the outstanding performances by the local artistes who have demonstrated at the regional level, that they can compete against the best of the best, claiming three of the top six spots in the competition.