Cow Dies In Oil Pit Where Brothers Were Rescued 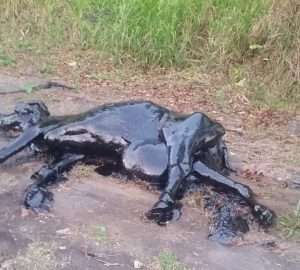 The farmer had tied the animal at a field at Egypt Village, Point Fortin, to graze on Sunday, the Express was told. But when he returned the cow was missing.

“He thought the animal was stolen but when he began searching around the field he saw something in the oil pit. It was a fully pregnant cow,” a villager said.

Fredrica Hodge, mother of the boys, said she heard of the incident and visited the scene on Monday. “When I got there I saw the cow covered in black oil lying on the ground. It was pregnant. Who is going to compensate this man for his loss?” she said.

Hodge said the farmer was distraught as he reared animals to earn a living. “These animals are very expensive and he lost the cow and the young,” she said.

Hodge said the area was not barricaded and humans and animals were still at risk.

“It has been two weeks since my sons fell into that pond and nothing has been done. We cannot remain like this. Someone may lose a child here,” she said.

Speaking in Parliament in response to an urgent questions, Khan said the Ministry was working with the Geological Society of Trinidad and Tobago to map various seeps and, if they are close to towns and villages, put up warning signs and barriers.

The brothers, 12 and 14, were flying a kite in a field near their Egypt Village home when the string broke. The kite drifted and went down behind the Egypt Village Government Primary School.

The brothers and two friends went in search of the kite, about 300 feet into the bushes. The Express was told the Cyrus stumbled into an unfenced oil pit, described by Heritage Petroleum Company Ltd as a “naturally occurring oil seep area”.

Clarke jumped in and tried to pull his brother out but he too became stuck and was unable to move.

It was the boys’ stepfather, Kenneth Small, who jumped into the 30-foot wide pit and held their heads above the oil that threatened to drown them all.

Fire officers responded and assisted the boys and their stepfather out of the pond. The three were taken to the Point Fortin Area Hospital. The brothers were transferred to the San Fernando General Hospital where they were treated for breathing complications.

But days after they were allowed to go home, Hodge said, her sons developed skin irritations.