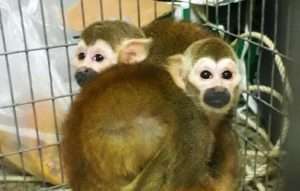 Trinidadexpress.com – A BUSINESSMAN who advertised three protected animals for sale on social media was arrested on Carnival Monday morning.

The bar owner, 50 of Grand Chemin, Moruga, was held during a sting operation after he was contacted under the guise that the animals would be purchased.

It was around 10 a.m. on Carnival Monday that officers stopped a sports utility vehicle along Moruga Road, St Mary’s. In the trunk they found two squirrel monkeys in a cage and one blue and gold macaw in a box.

The animals are protected species with the monkeys not being native to this country. Constable Phagoo and Bissoon and game warden Steve Seepersad were involved in the joint exercise between police officers, the army and the game wardens.

The animals were taken to the Forestry Division Wildlife Centre in St Joseph. The businessman will appear before the court on Wednesday.