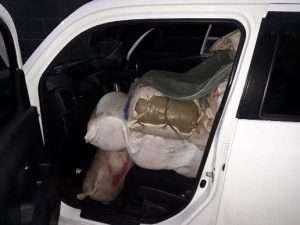 Three men have been jointly charged in connection with the seizure of six hundred and fifty eight pound of cannabis.

The men, Gregory Joseph, 47 years, Mason of La Borie, St. George, Kester Labarry, 34 years, Labourer of Grand Anse, St. George and Vincentian, Mc Lean Brown, 25 years, Labourer of Chateau, were taken into custody after police intercepted and searched two vehicles in the Black Forest, Vendome (St. George) area on Tuesday 26th February, 2019 about travelling towards the St. Georges direction.  Upon inspection fifteen bales of cannabis were seized from one of the vehicles.

They have been charged with trafficking in a controlled drug and are due to appear at the St. George’s Magistrate’s Court on Friday 1st March, 2019.