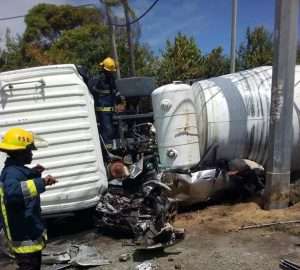 Trinidadexpress.com – The 24-year-old man behind the wheel of the cement truck involved in horrific crash in Tobago on Monday, was eligible to have a Heavy T license, says acting Transport Commissioner Basdeo Gosine.

Gosine said any person in possession of a Class four permit with one year experience can qualify for a Class five driver’s permit, which is required to operate heavy vehicles.

The driver of the cement truck was heading along Windward Main Road in Tobago, when he lost control and collided with two other vehicles, a truck and car.

Gosine said he was unable to determine the class of the cement truck from photographs. He said the driver, however, qualified for the licence to operate the vehicle.

According to TTPS Road safety Coordinator Brent Batson, some 500 tickets have been issued to drivers of heavy goods vehicles.

He said this followed complaints from small vehicle drivers against truck drivers along the nation’s highways.

Batson said while most drivers exercised caution on the nation’s roads, there were some who ignored the road traffic rules and regulations resulting in disastrous end for others.

There has been 24 road fatality deaths for the year so far.

Batson said truck drivers have an added responsibility when driving larger vehicles, “as it automatically carries with it a heavier energy impact on the roads whenever a collision occurs with smaller vehicles and that easily translates to very serious or fatal injuries when these classes of vehicles are involved in accidents, hence the reason for their lower speed limits.”

Batson said in many accidents, truck drivers escape without serious injury. Those in light motor vehicles, he said, are not as fortunate.

And he advised that drivers be cautious when on the roads.

“We would like to remind all truck drivers that when you are involved in crashes with lighter vehicles they tend to walk out of those crashes whereas those with lighter vehicles tend to be the ones to sustain most of the damage. This is the reason they must operate with a higher level of caution. We also want to remind drivers of light vehicles to give them (truck drivers) more room, remember these trucks have larger blind spots as well for both reversing and turning at intersections and cornering. The investigation will reveal how preventable this collision was, among other things,” said Batson.

Gosine added that there have been approximately 140 truck drivers ticketed for carrying excessive loads for the year.