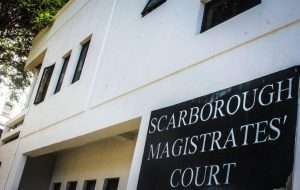 Appearing before Magistrate Cedeno, Henry was placed on $250,000 bail and the matter was adjourned to March 26.

Henry was arrested by way of warrant arising out of an incident in 2017 when he allegedly discharged three rounds from his service-issued firearm into the air, at the funeral of Junior “Coppa” Roberts, a man known to police, at Buccoo Public Cemetery.

Roberts was murdered on February 5, 2017, in a drive-by shooting.