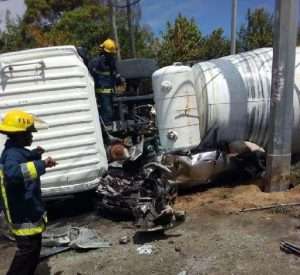 Trinidadexpress.com -Tobago has recorded its second road fatality for the year.

Dead is Claudia Hunte, of Trincity in Trinidad, a mother of two and retired confidential secretary with Angostura Holdings Ltd.

Hunte, the country’s 23rd road fatality of 2019, was the front seat passenger in a silver Nissan Wingroad when the accident occurred with a cement truck.

According to police reports, the cement truck was travelling west to east along Windward Main Road, when, upon reaching the Hope area, the driver, Neilton Alfred, 24, of Canaan, Tobago, lost control of the truck, colliding with another truck and a car, before landing on top of the Nissan Wingroad.

“Upon arriving on the crash site, we found a cement truck that overturned and fallen onto a Nissan Wingroad, in which there were three persons. Extrication operations ensued and there was great difficulty because the cement truck completely crushed the vehicle,” Thomas said.

Thomas said two trucks and an excavator were hired to assist in rescue operations. The cement truck was then raised to complete the rescue exercise.

Bertrice Dan Nancis and Flinton Murray were also occupants of the motorcar.

“The first person that was rescued from the wreckage was a lady by the name of Claudia Hunte who was suffering from severe life-threatening injuries. As a matter of fact, word is on her arrival at the hospital she succumbed to her injuries,” Thomas said

Thomas said efforts were then made to clear the scene by fire officers, during which there was a massive traffic pile-up for more than five hours. During this time fire officers tried to clean the roadway from fuel spillage.

“We were left with a situation where there was a huge diesel and oil spillage on the roadway and we had to engage ourselves in another protracted exercise to properly shampoo the road surface to prevent further occurrences,” Thomas said.

Thomas is appealing to road users to proceed on the roadways with due care and attention.

“So I am basically saying to the entire motoring public, be mindful that it’s just a small space for all of us to exist, therefore we need to exercise due care, we need to be responsible in our approaches to using the roadway.”