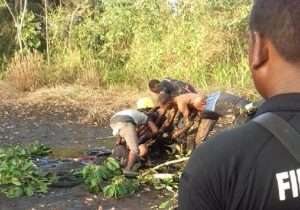 Trinidadexpress.com – For almost two hours on Wednesday, Kenneth Small kept his two stepsons alive by holding their heads above the oil that threatened to drown them all.

He came to their rescue after they became stuck in an oil recovery pit near their home at Egypt Village, Point Fortin that afternoon.

The brothers, Adiel Cyrus and Darold Clarke, were flying a kite with friends at the Egypt Village recreation ground near their home in Point Fortin, when the string broke.

The kite drifted and went down behind the Egypt Village Government Primary School.

Twelve-year-old Cyrus darted through the bushes to save the kite. His 14-year-old brother and friends followed him.

Clarke jumped in and tried to pull his brother out.

But he too became stuck in the viscous, black crude and was unable to move.

The incident occurred at around 3.30 p.m.

The boy’s cousin, Wayne Huyghue, told the Express yesterday: “I was at home when (the brothers’ friends) came running to the house. I saw my aunt start to run and I knew something was wrong. I ran behind her and I saw the boys in the pit.”

Huyghue said the boys’ bodies were submerged in the thick oil with only their faces and right hands visible.

“We started shouting at them to keep their heads up so that the oil did not get into their noses. “We were afraid we would lose them. We started throwing in tyres and branches to help them out,” he said.

Cyrus was ready to give up, he said. 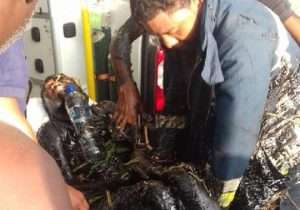 The boy began shouting, “Mummy, I am going to die.”

It was then that Small, a retiree, arrived and jumped into the almost 30-foot-wide oil pit and held on to the boys.

Small, 64, held the boys’ heads above the surface until help arrived.

Heritage Petroleum Company Ltd was contacted and a team arrived within minutes, the Express was told.

Huyghue said, “The HSE officers worked really hard with the fire officers to get them out. They used a ladder and they pulled them out. I have no complaints about them. They really worked hard.”

A video posted to social media showed the fire officers removing Small and the boys from the oil.

The two boys were covered in black crude and leaves and appeared unconscious.

The fire officer responded, “They are alive.”

The three were taken to the Point Fortin Area Hospital where they were cleaned up. Cyrus complained of having difficulty breathing. The boys were later transferred to the San Fernando General Hospital where they remained in stable condition yesterday.

Relatives said the children’s mother was distraught and did not want to speak about the incident.

“She is thankful her children are alive and will recover,” a relative said. Cyrus, however, was said to be traumatised by the incident.

Huyghue said residents have lost cows and other animals in the pit over the years.

“They need to barricade this and put proper signage. This is like an oil swamp,” he said.

Heritage Petroleum Company said in a statement it was asked to provide assistance to the three trapped relatives who were pulled out of a “naturally occurring oil seep area” off Techier Road, Egypt Village after they fell and were trapped.

“HSE personnel from Heritage were informed of the incident and were immediately dispatched to the scene where they worked alongside members of the Trinidad and Tobago Fire Service and Atlantic Emergency Response Team to rescue the individuals,” the company stated.

Heritage said it provided appropriate support and assistance to the persons affected.

But in the past, what was then Petrotrin would ensure that the pits were cleaned and secured.

Kesar argued that Heritage had a legal obligation to secure the pits.

“They are required to put barricades around it and have these pits cleaned from time to time. There is a statutory and legal obligation in the EMA Act and more so in the OSH Act where it speaks about these things,” he said.

Thomas said there were several open pits near the recreation ground.

“These areas are not cordoned off and the petroleum company was contacted,” he said.