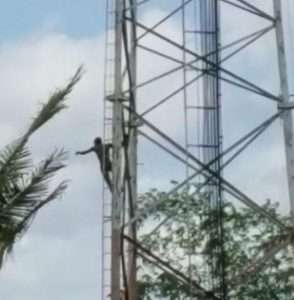 Trinidadexpress.com – An outpatient of the San Fernando General Hospital climbed a 150-foot cell tower and threatened to jump at around midday on Tuesday.

Shevon George, of Basse Terre, Moruga, removed all his clothing as he was climbing the tower.

Eyewitnesses said he was singing loudly on his way up.

The incident was recorded on a cellphone and shared on social media.

Police said the man claimed he was having problems in his relationship and wanted to end his life.

He swung from bar to bar to the top of the cell tower.

Officers attached to the St Mary’s Police Post responded to the report but were unable to get to the man.

Police said George climbed up and down the tower for almost three hours.

A fire officer who saw the commotion grabbed George and carried him to the ground.

An Emergency Medical Services ambulances was at the scene and transported him to the San Fernando General Hospital, where he is being treated.