No, You Can’t Just ‘Pick Up Anything’ – Cops Warn Fete Goers

Trinidad Express – Grenadian soca sensation Hollis “Mr Killa” Mapp’s 2019 release ‘Run With It’ has incited soca lovers at various Carnival fetes to pick up something and do exactly as the song says and ‘Run With It’.

While this could be a great way to get in some cardio, taking people things without permission could make you end up on the wrong side of the law.

ASP Wayne Mystar said during the Trinidad and Tobago Police Service’s media briefing on Wednesday that they received reports of a corn soup apparatus being picked up and it was not returned.

It was one of several reports the TTPS has received with regards to the song.

From coolers to chairs and even people, it seems nothing is off limits to what you can carry and ‘run with it’ as the song suggests.

At a fete on Wednesday night, some people picked up a vendor’s 10×10 tent and ran with it. It was later returned. 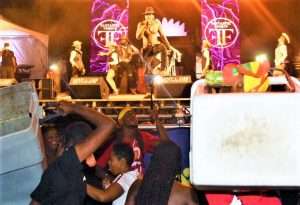 He said, “There are a lot of offences that could stem from some of the actions taking place of being allowed by this particular song.”

As we move into the height of the Carnival season, permission is still needed for a person to wine on another, he said.

“A person who refused (a wine) if they are asked and you continue to wine on that person then you would have committed an offence of battery and assault…so yes, you need permission to do those things.”

While some party-goers might be tempted to do ‘A Kees – I Shall Return’ get permission first, police said.