Man Drives Off Building After Losing $$ At Casino 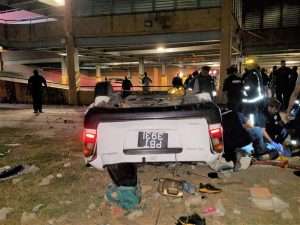 Trinidadexpress.com – AFTER losing money at a casino in Chaguanas, a man drove his car off a multi-storey car park and plummeted 30 feet to the ground early Wednesday.

The incident occurred around 3.20 a.m. at Price Plaza.

When they left the casino, Cassie said that he told John, who appeared intoxicated, not to drive off just yet but “take a rest”.

However, John started up his Toyota Corolla parked on the second storey of the car park and began to drive.

His vehicle crashed through a concrete wall and plunged to the ground.

The car fell on its hood and John was trapped in the vehicle.

Fire officers of the Chaguanas station responded and used the ‘jaws of life’ hydraulic tool to get John out.

An ambulance took him to the Chaguanas District Health Facility, then he was transferred to the Mt Hope hospital where he was warded.