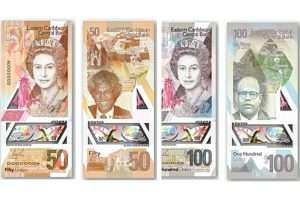 Polymer banknotes are produced from a thin, transparent and flexible plastic film made from polypropylene. These notes are hard to counterfeit, resistant to water and durable, difficult to tear.

These new bills will come with major changes which includes the signature of new governor, Timothy N.J. Antoine and  modernized images and landmarks. They will also have a unique tactile feature on each note for the blind and visually impaired as well as holographic foil strip on $20, $50 and $100 bills.

The ECCB is the first Central Bank in the Caribbean to issue an entire family of banknotes in polymer. The bank follows the likes of Canada who issued such notes in 2011 and both the banks of Scotland and England in 2016. Trinidad and Tobago issued a polymer $50 commemorative circulation note in 2014.

British banknote manufacturing company De la Rue, is conducting environmental impact analysis and will advise the ECCB on recycling options to handle unfit polymer notes. Unfit notes for circulation will be returned to the ECCB.

The polymer notes and current paper notes will co-circulate in 2019.