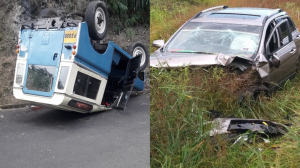 Police are investigating a Sunday (February 3rd) morning vehicular incident that left one person dead and another hospitalized in critical condition.

Timothy Reid, 44 years, of Moliniere, St. George was traveling along the Beausejour public road when he reportedly lost control of the vehicle he was driving and ran off the road.

Reid was taken to the General Hospital where he later died.

This is Grenada’s second road fatality for 2019. On January 31st, Anderson “Nanny” Scott succumb to injuries sustained from an accident on January 23rd at Victoria St. Mark.

Police are investigating both incidents.