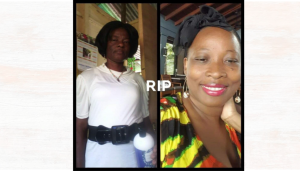 February 2, 2019, Grenada – A family at Marigot, St. John, is seeking help from the general public after two of their loved ones died days apart.

Kisha Sabazan, 35, died on Monday 28th January 2019. According to her aunt, Maureen Sabazan, she died from sickle cells complications. Today, Saturday 2nd, February, Kisha’s mother, Doreen Sabazan, 57, died in her sleep. It is unclear what caused her death, but one family member says she was stressed by her daughter’s passing.

A weeping Maureen, speaking to our news desk, also expressed her frustration with finding the doctor for St. John. She stated that after several hours of failed attempts to find the district doctor to pronounce the body dead, they had to seek assistance from the police, who located a doctor from another district.