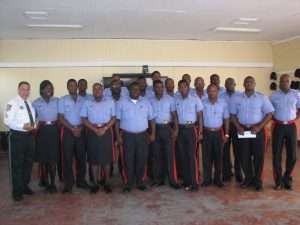 RGPF receives high praise from the nation’s prime minister, for their outstanding work and positive image that they manage to promote. The current crime rate of the country and the officers’ success in crime-fighting help in this promotion, attracting the attention of other Caribbean countries.

The nation’s police have been able to reduce the crime rate by 6.2% over 2017 figures. There are 8 CARICOM countries on the list of the top 25 countries in the world with the highest homicide rates, with Grenada not being included.

The successful work of the RGPF is being recognized regionally by countries who express their interest in recruiting officers to improve their crime-fighting efforts.

Prime Minister Dr. The Right Honorable Keith Mitchell says “I am proud of this. By your performance, you are paving the way for others. Sometimes we concentrate on ourselves, not realizing that the job we do, lays the foundation for our brother or sister to get an opportunity.”

The low level of the institution’s corruption level was also highlighted despite the assumption that major criminal and drug activity in any country is usually linked to corruption in the police force. Dr. Mitchell said “The less crime and the less corrupt practices we see, are a clear indication of the low level of corruption in our police force. We know for a fact that it is not completely clean, but the question is how we deal with it and it must be done impartially and without any bias.”

The good work of the force is expected to continue with the many plans of the Prime Ministers and senior officers including, a new mechanism for the promotion of officers; good leadership qualities and the need for officers to maintain good health through better lifestyle choices.