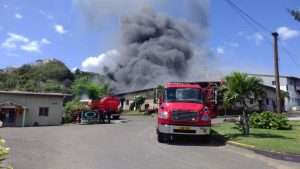 Osmund Thomas, Corporal in charge of the western division’s fire department,  expresses the department’s concern for the country as it experiences it’s driest January in history. Due to this dryness, they are planning  “a series of programmes” to sensitize the public relating to fires, its preventions, precautions, and safety.

He urges the public to take heed of how dry it currently is when starting fires and explains procedure to be followed, “you apply to the Ministry of Agriculture, then they will inspect your property and give you the permission to burn if they see it fit to burn.” However, he expresses his disappointment in ministry officials who fail to visit the properties of these applicants, saying that ‘we need to get this right.”

There was a recorded total of 300 fires in 2018, with 100 of those being bush fires and 54 being from rubbish. There were 49 house fires and many electrical (14) and vehicular fires (17) which Thomas believes was a result of negligence and pleads to the public to take care of the safety of their homes. The fires caused an estimated 13 million dollars total in damage, a total that Thomas believes is too much for a little country.

Despite the country’s current position in combating fires, Thomas believes that “there is a very good chance to battle out despite limited resources” but that depends on the support of the citizens of the country. He says that “if precautions are taken seriously, we can have a safer Grenada.”