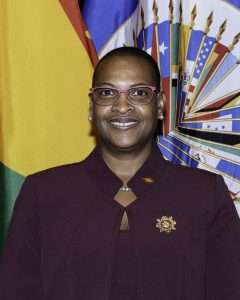 Ms. Yolande Smith was at the time presenting her credentials to the Secretary General of the OAS, Mr. Luis Almagro.

Restating Grenada’s commitment to building a stronger OAS, Ms. Smith said: “We believe in the principles that foster the maintenance of strong institutions: good governance, respect for the rule of law, and the promotion of human dignity.”

She added that Grenada shares with the OAS, an abiding dedication to transform the organisation into an effective and relevant collective body that helps to deliver a brighter future to our hemisphere with “more rights for more people”.

He further noted that “having Ambassador Smith among us underscores Grenada’s commitment to gender parity in its representation; with her arrival four of Grenada’s eight representatives have been women.”

Grenada was the first Eastern Caribbean country to join the OAS shortly after independence in 1974.