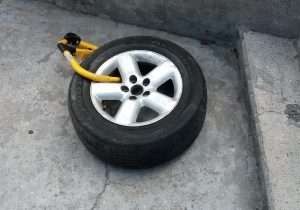 A 20 year old, St. George resident was charged by police after he removed a clamped wheel and replaced it with his spare.

Charges of tampering with an immobilising device, obstruction, and breach of one way traffic were laid against Kimel Cruickshank, Auto Body Repairman of Woburn, on Monday 28th January, 2019, after he removed his clamped vehicle wheel while illegally parked at the Hospital Ring Road, St. George’s.

Cruickshank was granted bail in the sum of four thousand dollars with one surety. He is due to appear at the St. George’s Traffic Court on February 25th 2019.

Section 3 (4) of the Road Traffic (Amendment) Act 21 of 2017 makes it an offense for anyone to tamper with an immobilizing device that has been fitted onto a vehicle by a police officer or a person authorised by a police officer.

A person who is found guilty of this offense is liable on summary conviction to a fine of five thousand dollars and to imprisonment for one month.