January 25, 2019 – The National Water and Sewage Authority (NAWASA) is calling out all water truck operators and owners to a special meeting on Monday. The meeting will be from 11 am at NAWASA’s Dusty Highway conference room. According to NAWASA, the meeting is to discuss the dry season and their operation during this period.

Already communities are feeling the effects of the dry season, which officials say is forecast to be drier than normal.

As of January 22nd, 2019, 4.7 millimetres of rainfall was received at the MBIA, a far cry from the normal 30-year average, for the month of January, of 61.7 millimetres, using the Climatological Standard Normal.

NAWASA’s General Manager, Mr. Christopher Husbands, and a team from NAWASA recently met with prison officials to discuss the dry seasons. The prison is affected by the current valve regulation at the Les Avocat water system.

Currently, they are out of water from 9 pm to 5 am, daily. Other communities are likely to be affected as we go deeper into the dry season. NAWASA is encoring homeowners to conserve water and invest in adequate storage facility at minimum 35 gallons of water, per person, per day. 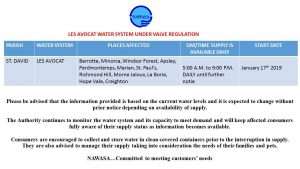