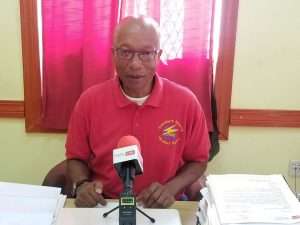 Press Release By GTAWU – As leader of the Unions and Staff Associations (U&SAs) negotiating team, I call upon the Grenada Government to show leadership, understanding and compassion by taking the necessary step to bring an immediate end to the “Work-to-Rule” actions engaged by the Grenada Union of Teachers (GUT). What is this step? Immediately restore the salaries that were maliciously deducted from the teachers and other public officers as a result of the struggle for Pension and Gratuity.

In a total display of arrogance and abuse of power, the Government maliciously and insensitively docked the workers’ pay hoping that it would cripple the resolve of workers to fight. What the Government failed to properly consider is that “when you throw a pebble in a pond you do not have control over the ripples”. The Government must be held responsible now that the ripple effects have started to be felt with the cancellation of several school sporting and extra-curricular activities.

The Government must accept that they were very short sighted and insensitive when they deducted the Public Officers pay – especially in the Christmas season when it is traditional for most of us to be engaged in extra spending to bring joy and happiness to our loved ones. The Government must be held responsible for the financial challenges faced by the children and loved ones of our Teachers and Public Officers who had less to spend during the Christmas season as a result of the malicious deductions of salaries.

I call upon the Government of Grenada to end the work-to-rule actions of the Grenada Union of Teachers. This can be easily done by Government immediately returning the salaries that were deducted. The ball is in Government’s court!