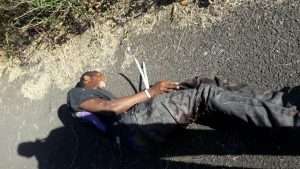 Escaped prisoner, Hayden Phillip, was recaptured on Saturday 19th January, 2018, about 4:00 p.m. in the vicinity of Old Fort, St George by a team of Officers from Her Majesty’s Prisons.

Her Majesty’s Prisons and the Royal Grenada Police Force express profound gratiude to general public and the media for their assistance during the period.

The operation was a collaborative effort between Her Majesty’s Prisons and the Royal Grenada Police Force.