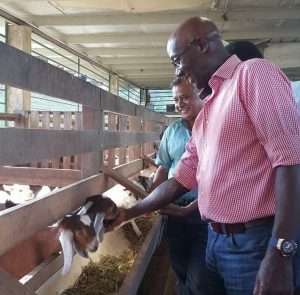 News Day  – The Prime Minister is calling on parents, teachers and students of the Four Roads Government Primary School to stop referring to children as “kids.”

At a sod-turning ceremony for the Diego Martin pedestrian walkover, at the school this morning, Dr Rowley said this was one of his pet peeves.

Recalling his own expericences as a child, listening to his visiting aunt from the United States, who used the term, he said he wondered why she would refer to children as kids.

He also called on the children at the school to stop referring to themselves and their peers as kids.

“This problem has been with me now for about 60 years, I distinctly recall one of my aunts who lived in the United States for a long time. She kept talking about the “kids” and I was confused, it was only later I realised she was talking about boys and girls and ever since then it really irks me to hear people refer to children as kids.

“Goats have kids, people have children and they are called boys and girls. Can you help me to get rid of them referring to you as kids? Your parents are not goats. That’s American slang that we picked up 60 years ago but its time to give it up.”