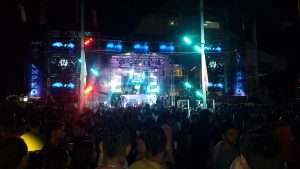 This year, there are over 200 fetes planned for the two months leading up to the parade of the bands that takes place on March 4 and 5, 2019.

In fact, promoters have added 45 new fetes this year.

The month of January accounts for 32 fetes, four of which have already taken place, with January 1 kicking off the season.

This coming weekend will host 8 fetes, including the popular Tribe ICE Cooler Fete carded for Saturday.

Of the 45 new fetes, 12 take place this month, including a new wet fete called Hydrate, hosted by Tribe, Bliss, Harts, The Lost Tribe, Rogue and Pure on January 13.

February accounts for 98 fetes, the biggest day being February 28, with 15 fetes that one day.

And while the schedule shows multiple fetes per day throughout the season, there is one day that remains set aside for just one fete – Machel Monday which takes place on February 25.

Fantastic Friday (March 1) is as usual, the busiest day of the season, with 23 listed fete events.

And although the parade of the bands is early March, that month accounts for 76 fetes, 14 of which will be held after the Carnival parades.

This season 13 schools will host events.