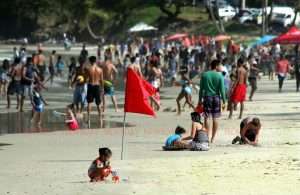 News Day – The TT Meteorological Service (TTMS) today issued hazardous seas alert but assured the population that there was no tropical storm threat, watch or warning.

The yellow level alert stated that from 2 pm today to 5 pm on Monday, coastal and offshore waters around Tobago, and north and east of Trinidad would have strong low-level winds agitating sea conditions which would cause waves as high as 2.8 metres in open waters.

“Yellow level means there is the potential for negative impacts. However, the damage is avoidable if persons monitor conditions and reduce their level of exposure.”

The alert suggested that sea bathers, fishermen, and small craft operators monitor sea conditions and take necessary actions to preserve life and property. This included avoiding going into the sea, following lifeguards’ instructions, and being alert for large waves and dangerous currents.

Senior meteorologist Albert Alexander explained that pressure gradients produce wind. “With the cold air coming off the continent, there is a high pressure cell building in the Atlantic. As the pressure increases there it produces a pressure gradient in our area, which gives us the strong winds. The higher the pressure builds the stronger our winds will be.”

He said strong low-level winds in the atmosphere was usually a dry season feature that TT would see in January and February so it was a little early for such occurrences. However, he said it was not abnormal as the country was transitioning from rainy to dry season at the moment.