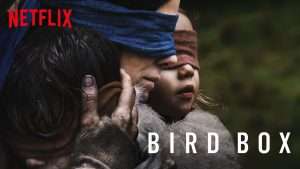 The film based on the book Bird Box by Josh Malerman was made just for Netflix and has been available since December 21 attracting over 45m viewers.

This reviewer, a non-horror film watcher, so wimpy that she cannot usually watch Over 18s films found the production gripping.

The main reason this reviewer even watched it was when seeing a film starring the Miss Congeniality and 28 Weeks actress presumed that this was going to be of the same lighthearted genre, with the slight confusion of presuming it was a remake of Gene Hackman’s hit The Bird Cage. In fairness the reviewer was recovering from the flu.

The film opens with a reluctantly pregnant artist Malorie (Sandra Bullock) painting a picture and seeking a lift to the hospital with her sister Jess (Studio 60 on the Sunset Strip actress Sarah Paulson) to attend an appointment with her obstetrician Dr Lapham ( ER’s Parminder Nagra) ahead of the birth of her child. On the television just as they are leaving, there is a news report talking about mass suicides around the world, they are being attributed to some mysterious force but it is not an issue for the US.

In a scene that looks like a doomsday event out of Independence Day or one of Will Smith’s saving-the-world films, the reviewer realises that this is certainly not a chick flick.

Sandra Bullock’s sister Jess has deliberately crashed the car and a subsequent event makes it appear that the heavily pregnant Malorie will have to get herself to safety. She eventually finds shelter in the house of a stranger played by John Malkovich.

The heavily-pregnant Malorie realises that there are a number of people in the house who are seeking refuge from the dark forces outside which are making people take their own lives.

It is unclear at this point if pregnant women are as immune to the bad forces as the clinically insane seem to be luring people to look at the dark forces so that they die.

There are a sequence of flashbacks to life in the refuge house and then of Malorie as a mother of two young children stepping outside with a blindfold on foraging for food.

Events get so bad that you see the mother and her nameless children get in a boat and make their getaway down a river. 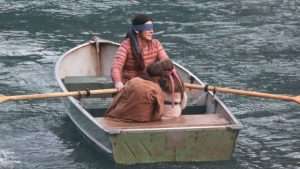