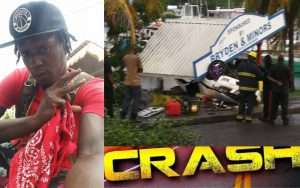 Grenada, 6th December: Tevin Cox, also known as Tevin Mitchell, the man involved in the November 4th incident where the vehicle he was driving crashed into a bus shed at the Kirani James Boulevard has died.

Police made the confirmation moments ago.

At the time of the incident Tevin was driving a vehicle that was reported stolen hours before. The owner of the vehicle, a school teacher by profession, said he gave a man a ride and stopped off at a supermarket to purchase some items. Upon his return, the vehicle was missing. He later found out the missing vehicle was involved in a crash and two persons were injured. One of the two would turn out to be Tevin Cox, who was by then in critical condition at the General Hospital.

Investigators said speed played a factor in the crash and they were also looking into possible drug and alcohol charges.

Police are still investigating the incident.

It is not immediately clear what exactly caused Cox’s death.