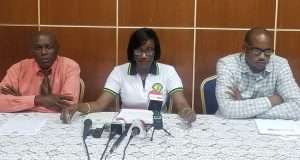 ST. GEORGE- NOVEMBER 13, 2018, GIS: The Government of Grenada says it will move to protect people’s health care at the General Hospital and other facilities should top medical officials join a call for industrial action by the Public Workers Union.

Sources at the Ministry of Legal Affairs says that the Government is preparing to file an injunction against any strike in the health care services sector which fails to recognize the law.

There are restrictions on industrial action in essential services such as the health sector.

According to the source the court injunction would be filed before the end of the week.

The PWU has announced that it is joining industrial action which up until now has been limited to teachers over the dispute over gratuity payments.

A government source says that administration is concerned that the health care of ordinary Grenadians could be compromised by action that is not legal under the labour statutes.

But government officials said that the majority of public servants showed up for duty on Tuesday.

A check at the Ministerial Complex, the Ministry of Finance and the Customs and Ports indicate that operations there were normal.