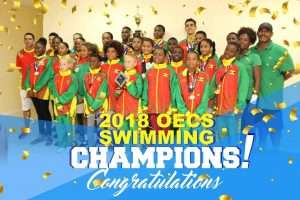 November 12, 2018, St. George, Grenada.   The Grenada National Swim team has retained the OECS Swim Championship title for the 4th consecutive year following the competition held over the past weekend in Antigua.   At the beginning of October the 34-member team was named and this marked the commencement of 4 weeks of intense preparation for the pool and open water competitions from November 8 – 11th.  “We are elated with the team’s performance,” says President Peron Johnson.

Grenada swam away with a resounding victory with a total of 1450 points, leaving its closest rival, Team Antigua, behind by 175 points.   St. Lucia placed third with 1117 points, followed by St. Vincent with 901.5 points.   The competition was intense but Grenada was determined from day one to remain victorious and come home with the trophy.  The team made their mark by setting an astounding 17 new OECS records, breaking records that were in place for over 15 years in some cases.

In addition to the team trophy, Team Grenada amassed 131 medals in the individual and relay events, 51 gold, 42 silver and 38 bronze medals.   Additionally the team secured five age group titles. Sara Dowden won the girls 9-10, Anaika Charles the girls 11-12, Eli Zerpa won the boys 13-14, Delron Felix won the 15-17 title and Oreoluwa Cherebin swam away with the girls 18 and over title.

The boys 13-14 year olds Jenebi Benoit, Zackary Gresham and Eli Zerpa dubbed the 1,2,3 squad put out a superb performance taking all three positions in the overall boys and the 200m Individual Medley. Oreoluwa Cherebin scored the highest individual points for the meet with a total of 97 points.

In the third OECS Open Water competition Grenada entered 3 swimmers Jaydon Hyson, Enya Noel and Dajenel Williams.  All three swimmers took home the gold in their respective age groups, taking Grenada’s overall medal count to 134 total.  Hyson and Williams both swam the 3k, with Williams winning over all in this course, while Noel participated in the 5k. Grenada is looking forward to greater participation in the Open Water aspect of the competition next year when the event moves to St. Vincent.

The Permanent Secretary in the Ministry of Sports, Mrs. Ann Isaac was on hand to congratulate the team today on their significant achievement.  On behalf of the Minister, Mrs. Isaac pledged the Ministry’s continued support toward the development of the sport.

With the lands now vested in the Grenada Amateur Swimming Association for the establishment of an aquatic facility, GASA has its eyes set on hosting the OECS Championship in the very near future.