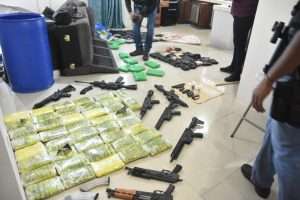 Trinidad Express – Police made a major bust in the Chaguanas District overnight. The intelligencedriven operation has resulted in the arrest of two suspects and the seizure of large quantities of marijuana and firearms at a house in Chaguanas.

The exercise, coordinated by Commissioner of Police Gary Griffith, was conducted between Thursday anf Friday and involved officers of the Special Operations Response Team, the Strategic Services Agency and the Canine Unit.

Acting on intelligence gathered over the past 18 months, officers proceeded to a building at Macaya Trace, Munroe Road, Chaguanas, where they executed a search warrant. The search resulted in the discovery and seizure of large quantities of drugs and automatic assault rifles.

Two male suspects who were found in the building at the time of the exercise, were arrested. Police are in the process of quantifying the street value of the find.

Commissioner Griffith says the automatic assault rifles which were seized are indicative of the type of firepower which criminals now have at their disposal in Trinidad and Tobago. He believes that it is in this context, police officers need to defend themselves against such threats. The Commissioner is commending officers involved in the operation for their hard work and dedication to duty. Commissioner Griffith is also thanking members of the public for providing information which aided in the success of the operation.