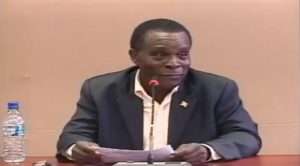 (CMC) – Prime Minister Dr. Keith Mitchell is expected to be among witnesses summoned to testify in a financial wrongdoings and corrupt practices investigation into the Marketing and National Importing Board (MNIB).

The probe is being undertaken by the Office of Integrity Commission and Mitchell confirmed that he is prepared to be called as a witness.

“Question under oath is coming, they (the Integrity Commission) sought to have resources from us and we were positive to that; They may call me too, but as I say I am prepared to be called to give an idea of my knowledge and information,” Mitchell told reporters, when asked to provide an update on the investigation which was announced in July.

As a state-owned enterprise, the MNIB falls under the jurisdiction of the Ministry of Finance headed by Mitchell.

The Commission was established to ensure that public officials uphold high standards of integrity in the performance of their public functions and to give effect to the provisions of The Inter-American Convention against Corruption. It will assist in improving the standards of good governance, transparency and accountability in government.

In July, Mitchell announced that Cabinet had endorsed a recommendation for a thorough investigation amid revelations of possible inappropriate use of MNIB funds.

Mitchell had also acknowledged that a lot had gone wrong at the MNIB and following the appointment of a new board in March, the then chief executive officer, Ruel Edwards left his job for a new post within the Ministry of Economic Development.

Edwards has since been placed on leave by the Public Service Commission (PSC), the body that contracted him to the post to the new post.

In September, the Integrity Commission said that further to media reports and statements circulating about financial wrongdoings at the MNIB it had commenced investigations into the operations of the board.

Mitchell said that Cabinet will endorse the Commission investigation and will accept its findings.

He told reporters Wednesday that the investigation will be led by “outside legal personnel” and that other government departments were also under investigations by the Commission.

“We have to be honest with ourselves, those who don’t want to admit it that is their business…if we want to say there are not corrupt practice within the public service, the could say so, I know there is corruption in every single Department of Government, that is a fact, it may be at different levels,” he said.