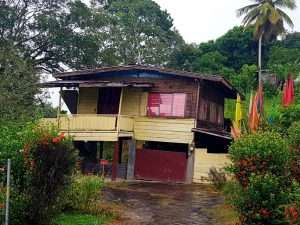 Trinidad Express – Days after she told a story of demons in her head, a 40-year-old woman died from ingesting a poisonous substance on the streets of Penal on Thursday.

Her 14-year-old daughter is being treated at the San Fernando General Hospital for poisoning.

Hema Hosein, a housewife, was found unconscious on the pavement along Clarke Road, Penal, at around 3pm.

Her daughter, Ria, was lying at her side.

Police said the mother and daughter were taken to hospital where Hosein died while being treated.

The secondary school pupil was listed in a stable condition.

The mother and daughter lived at Manohar Trace, Barrackpore.

Hosein’s husband and the child’s father, Nazir Hosein, was with them when the incident happened.

A relative, Shazard Khan, said the Hosein and her daughter were returning home in a taxi when they asked to stop at Clarke Road.

The teenage girl was her only child.

Khan said days before her death the mother had complained of “seeing evil spirits” and was afraid to stay at her home.

He said the family participated in Hindu kali puja worship.

Khan said the family would leave their home at 3pm and return the next morning.

“She was afraid to sleep in the house. Last Sunday, she strip herself and was running around like a mad woman. Her husband was running behind her with a towel,” he said.

Khan said the teenager had also suffered a mysterious ailment.

He said the girl woke one morning with a swollen foot and was unable to walk. “And because of this she would stay home from school,” he said.

Nazir Hosein was not at the family’s home when the Express visited.

Neighbours said the family kept to themselves.

“Hema was quiet and you would hardly ever see her. She would stay inside all the time. I was very surprised when I heard she drank poison,” a neighbour said.

Khan said he had warned the family about the consequences of participating in kali puja. “I told them about it. I was a part of it too and I stopped. I told them to stop. And then the child got sick and (Hema) was acting like a mad woman,” he said.