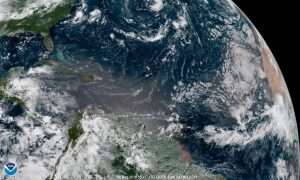 St. George’s, Grenada – Monday 15th October, 2018 – Grenada and other Caribbean countries are expected to be affected by two tropical waves approaching the area from as early as Tuesday night.

According to the Met Services at the Maurice Bishop International Airport the moisture associated with two approaching tropical waves are likely to merge near the Lesser Antilles.

Model guidance is indicating an abundance of moisture near Grenada as early as Tuesday night and holding until Thursday 18th October, 2018.

In addition, several models are predicting the potential for significant convective development and above normal rainfall for Wednesday and Thursday.

The Met Office continues to monitor the tropical waves as they approach the Lesser Antilles and will update accordingly.

With the likelihood of above normal rainfall expected, flooding and landslide will be a concern; this is therefore an extremely good time to review your emergency plan with family members or workers.