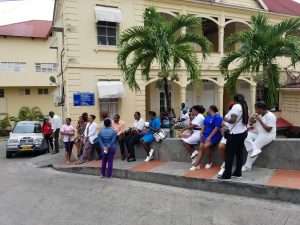 The Grenada Trades’ Union Council (GTUC) unreservedly condemns the comments made by Prime Minister – Dr. Keith Mitchell regarding the committed workers in the Health Care Sector. Such utterances from the Prime Minister could only result in the further demoralisation of the workers.

Rather than address the burning issue of inadequate supplies of medicine, equipment and facilities in the public Health Care system, the Prime Minister sought instead to disrespect and smear the character of the committed and hard-working Doctors, Nurses, Orderlies, Securities and all Health Sector workers.

The Prime Minister went further to tell the whole wide world that our professionals in the Health Services are incompetent! The GTUC sincerely hope that our people do not suffer the possible negative impact that such an irresponsible utterance can have on the Country. This is in the context where most of our Medical Practitioners have been trained by some of the better Medical Universities and Schools possibly in the world. This is in the context where several of the Health Sector workers are recipients of Government scholarships. If our workers were so incompetent, then the Prime Minister must explain to the nation why so many of our Nurses are sought after by so many countries.

What is even more alarming and disturbing, is that these utterances were made in the presence of Grenada’s Minister for Health, Honourable Nicholas Steele — who sat there without even defending himself and the workers who fall under his charge. After all, if indeed there are such concerns in the health Sector, then one of the questions that must  be answered is, where would the “buck stop”? An obvious answer would most likely be, the Minister for Health!

The Grenada Trades’ Union Council is concerned that the Prime Minister may be showing signs of returning to his “old ways”. This is triggered by the fact that among other observations, the Prime Minister is yet to acknowledge receipt of and respond to the GTUC’s letter of September 5, 2018, requesting a meeting to discuss matters of concern within the health sector.

As the umbrella Trade Union body and as a member of the Committee of Social Partners (CSP) the GTUC calls upon the Government and Prime Minister Dr. Keith Mitchell to respect workers of the country. The GTUC must also highlight that apart from the Prime Minister retracting his utterances, the Government must speedily move to address the many challenges facing health Sector workers.

The Grenada Trades’ Union Council stands in solidarity with the Public Workers Union and the workers in the Health Sector in this period.