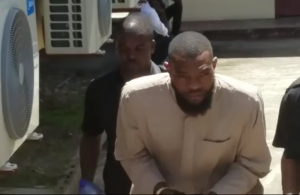 A resident of Belmont (St. George) charged in connection with last weekend’s shootings, has been remanded to Her Majesty’s Prison.

Rahiem Kelshall, 24 years old, appeared at the St. George’s Magistrate’s Court on Wednesday 3rd October, 2018 charged with two counts of attempted capital murder, one count of robbery with violence and possession of a firearm and ammunition.

The shootings which occurred sometime after midnight on Saturday have left two persons hospitalized, one of whom is in critical condition.

Kelshall is alleged to have accosted and robbed a businessman of an undisclosed amount of money at his Kirani James Boulevard business place, while wearing a mask.

Mere minutes after making his escape, he is alleged to have shot his second victim who was walking along the Jean Anglais public road.

Police have recovered one firearm.

Kelshall is due to reappear in Court on October 23rd 2018.