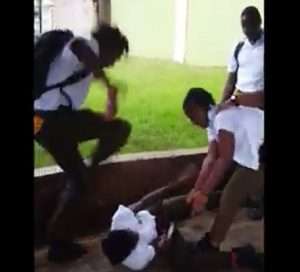 Trinidad Express – A police investigation has been launched into a fight among pupils of the Princes Town West Secondary School, where a schoolboy was seriously injured.

Trinidad and Tobago Police Service (TTPS) officers and members of the TT Regiment visited the school on Monday and interviewed pupils on the incident.

The teenage boy was brutally kicked and his head stomped on by his schoolmates o the school compound last week Thursday.

According to school officials, preliminary investigations revealed that the victim was attacked after making discriminatory remarks against a female pupil.

The boy told the girl that she was fat.

The Express was told that the girl complained to a male relative who is also a pupil at the school.

The boy was confronted and a fight broke out, the school official said.

The schoolboy was taken to the Princes Town Hospital and transferred to the San Fernando General Hospital. He is being treated for head injuries.

Police said he was now in stable condition.

The teen took to social media at the weekend to dismiss rumours that he had succumbed to injuries.

He said his condition was improving.

Ministry of Education officials stated that the pupils involved in the fight were suspended while the injured pupils was being monitored.