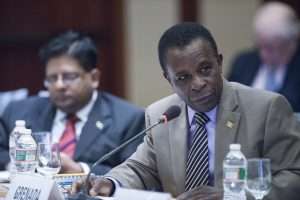 Fellow Grenadians, it has become necessary to clarify recent statements about the inappropriate use of Government resources for personal benefit. My statements were not meant to imply that all public officers are guilty of this, but it is important to face the ugly truth that this has been happening and continues to happen across the public service, not only at the General Hospital which was specifically referenced in response to a question on health.

The statements made at the recent town hall meeting in Brooklyn, New York were in no way different from previous statements made about the pilfering of supplies from various Government departments and the inappropriate use of Government resources. This is not hearsay, it is fact and I have repeatedly shared my concern about the corrupt practices across Government.  I do not share the view that raising this issue with fellow Grenadians in the diaspora was inappropriate. We call on them to give back to their home country, so we owe it to them to be honest about what is really happening here in Grenada.

There is no denying that there are many honest, decent and hard-working public workers who given yeoman service, often going above and beyond the call of duty, serving the Government and people of this country. However, the inescapable fact is that there are also some public officers who use their position to access Government resources for self-aggrandisement at the expense of the people of this country. It is the actions of this group of selfish and self-serving public officers that tarnish the image of what should be a noble profession.

This wanton disregard for the proper use of Government resources puts the entire country at risk. It undermines valiant efforts being made to improve the socio-economic status of the country and its people. When resources are used for purposes other than originally intended, it forces additional and unnecessary spending and jeopardises allocations for other equally important areas of service.

As a Government, we are entrusted with the mandate of furthering the overall development of

Grenada. As Minister of Finance, I am personally appointed as the caretaker of this country’s financial resources, but it is not a task performed single-handedly; it is with the support of all public officers who are similarly entrusted with departmental financial accountability and we further rely on the honesty and individual accountability of each public officer.

I stand prepared to meet with our doctors and nurses who may have felt personally offended by my comments about rampant stealing at the General Hospital but I can categorically state that the intention was not to malign all health care professionals. I reiterate my recognition and admiration for those who perform credibly, putting the health care needs of patients above all else. However, we cannot and must not turn a blind eye to the prevalence of corruption.  Acknowledgement is the first step in correcting an ailment. My intention was simply to underscore the detrimental effect of the actions of some, not only in the health service but across all of Government, including the Ministry of Infrastructure Development, Customs & Excise, Inland Revenue Department and the Marketing and National Importing Board where an inquiry is currently in progress.

I must reaffirm my sincerest gratitude and appreciation for all public officers who give good service. You are and will continue to be the backbone of Government operations.