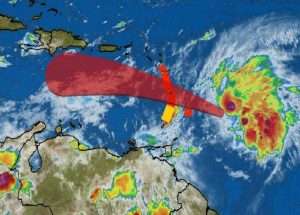 Kirk is moving toward the west-northwest near 16 mph, and this general motion with a slight decrease in forward speed is expected over the next few days.  On the forecast track, the center of Kirk will move across the Lesser Antilles within the Tropical Storm Warning area by this evening.

Maximum sustained winds are near 50 mph with higher gusts.  Gradual weakening is anticipated during the next couple of days, but Kirk is forecast to move across the Lesser Antilles and into the eastern Caribbean Sea as a tropical storm.

Tropical-storm-force winds extend outward up to 140 miles, mostly north and east of the center.

Though Grenada is not expected to be directly affected by Tropical Storm Kirk, the island is expected to experience rains, heavy showers in some areas and thundershowers.

A flood warning in areas so prone is in effect and a marine advisory has also been issued by the Met Office for North easterly to easterly swells.

We emphasis that Grenada and it’s dependencies are not under any Tropical Storm watch or warning. And encourages citizens to remain vigilant and ensure your emergency plans are in place.

Preparedness is key in mitigating against hazards and critically important in preserving lives, livelihoods and property.

The Met Services will continue to monitor Tropical Storm Kirk and provide timely updates to the public through the various media outlets.