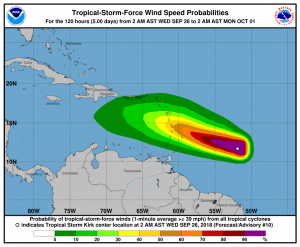 Days after being downgraded to a tropical wave, Kirk has regenerated into a tropical storm. According to a 5am bulletin from the National Hurricane Center, the NHC, the center of Tropical Storm Kirk was located near latitude 11.8 North, longitude 52.7 West. Kirk is moving toward the west near 18 mph (30 km/h). A westward to west-northwestward motion is expected through Friday night. On the forecast track, Kirk is expected to approach Barbados and the northern Windward Islands Thursday afternoon and move into the eastern Caribbean Sea by Friday morning.

Maximum sustained winds are near 45 mph (75 km/h) with higher gusts. Little change in strength is forecast until Kirk moves through the central Lesser Antilles Thursday afternoon and evening. Rapid weakening is expected on Friday after Kirk emerges over the Caribbean Sea.

Tropical-storm-force winds extend outward up to 115 miles (185 km) from the center.

Additional warnings or watches could be issued later today.