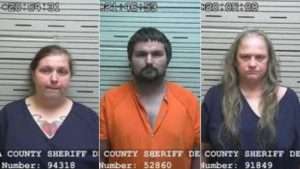 (FOX NEWS) – A 13-year-old boy who was found naked and chained at the ankles in an Alabama home was forced by the three people who took care of him to sleep in a dog crate, officials said Monday.

Danielle Nicole Martin, 32, Joshua Daniel Martin, 26, and Vickie Seale Higginbotham, 58, appeared in court on charges of aggravated child abuse, the Montgomery Advertiser reported. Danielle and Joshua Martin — the boy’s mother and stepfather — and Higginbotham, the boy’s grandmother, were taken into custody after police received an anonymous call Thursday about the child being chained inside the Prattville home.

“How can you do these things, allow these things to take place, when you are in a lucid, conscious state?” Autauga County District Judge Joy Booth said during the Monday court appearance.

An investigation showed the 13-year-old boy had been bound by chains and padlocks for at least 18 hours before police went to the house, the Montgomery Advertiser reported. The child had been chained before, and was even forced to sleep in a dog crate at night, officials said.

The Martins blamed Higginbotham for the alleged abuse and claimed they didn’t know what was happening to the child. Joshua Martin placed blame on his long work hours.

“We didn’t know what [Higginbotham] did,” Danielle Martin told Booth on Monday, adding she was not on drugs when the alleged abuse happened. “My mother has a mind of her own. I tried to stop her when she put him in the dog crate.”

Higginbotham also told the judge: “They didn’t know that I chained the child to the bed at night. Danielle and Josh had nothing to do with this. I would never harm a child on purpose. I made a mistake.”

Booth did not buy into the three family members’ claims, the Montgomery Advertiser reported. They are being held on $30,000 bond.

The 13-year-old was taken to the hospital and treated for malnutrition. Two other children, ages 5 and 12, were taken away from the home and placed in custody with the Alabama Department of Human Resources.