Tropical Storm Kirk is moving fast towards the Caribbean. In its 5 p.m. advisory Sunday, the National Hurricane Center said Tropical Storm Kirk was racing toward the eastern Caribbean — moving west at 23 mph and located about 645 miles southwest of the southernmost Cabo Verde Island. The storm continued to pack maximum sustained winds of 40 mph with tropical storm-force winds extending out 70 miles from Kirk’s center.

“Since the system should be moving over warmer waters and through low vertical shear for the next day or so, some strengthening is anticipated into early this week,” forecasters said. “Later in the forecast period, Kirk should be encountering increasing shear associated with strong upper-level westerlies over the Caribbean, and this will likely cause weakening.”

The storm winds are forecast to reach 60 mph in the next 48 hours and should keep moving west, according to the hurricane center advisory.

A mid-level subtropical ridge to the north of Kirk should keep steering the storm west, but that ridge is expected to weaken three to four days from now.

The Trinidad and Tobago Meteorological Service (TTMS) in an update at 5:00 p.m. on Sunday 23rd September, 2018 advised citizens that Tropical Storm Kirk has maximum sustained winds near 65 kilometers per hour with higher gusts. The TTMS has advised that some strengthening is forecasted during the next day or two. However, weakening is likely during the middle to latter part of the week, as it approaches the Lesser Antilles.

The TTMS has also advised that the forecast track/cone graphic represents the probable track of the centre of a tropical cyclone. This means that it is possible for the centre of the cyclone to pass anywhere within the shaded/hatched region. The cone does not show the size of the storm or the extent of its wind field. It is also possible for hazardous conditions to occur outside of the cone. The graphic includes estimations based on data, and should not be interpreted as a direct representation of the path of the cyclone. 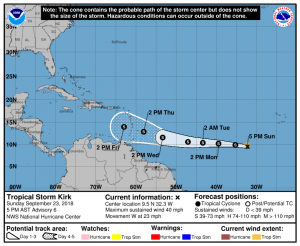