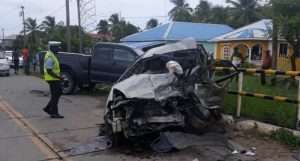 (NEWSROOM GUYANA) — A teen mother and her six-month old baby, along with the driver of the vehicle they were in, were killed after the vehicle crashed into a pickup on the Essequibo Coast on Friday.

Dead are 19-year-old Tristiana Joseph and her baby Javon; and Corwin Paul, 38, the driver of the car they were in.

The accident occurred at around 14:35 hrs at Jib Public Road, Essequibo Coast.

Reports are that the pickup, GPP 5205, was being driven by 80-year-old businessman Adam Barakat of 17 Bounty Hall Essequibo Coast. He was proceeding east along the northern side of the road while the car was proceeding in the opposite direction at a fast rate of speed.

As both vehicles approached the bridge which separates Jib and Paradise, the driver of the car who was negotiating the left bend, reportedly lost control and collided with the front center portion of the pickup. 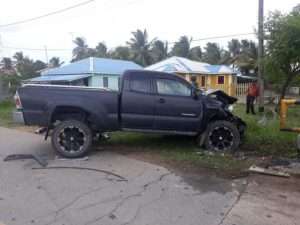 As a result of the collision, both drivers and the occupants received injuries and were picked up by public spirited persons and rushed to the Suddie Public Hospital where they were seen and examined by a doctor on duty who pronounced Corwin Paul and the baby dead.

The young mother was admitted to the Intensive Care Unit but died at around 19: 15 hrs.

The driver of the car was a former community health worker.

Police are continuing their investigations into the accident.