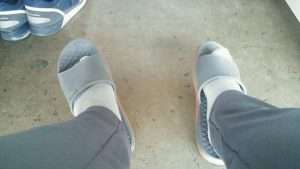 Newsday – IF your slipper is always sliding off your foot, beware you probably have diabetes. So said Prof Vijay Naraynsingh in a public lecture, “Diabetic Foot — A national disaster.”

He displayed graphic photos of how the bones of a toe are destroyed and deformed by diabetes, so ruining the shape of the whole foot, leading slippers to slip off readily.

“You’ll be in hospital within a year with a diabetic infection,” Naraynsingh warned. “And you’re going blind.” Some 73 per cent of amputees had shown the Slipping Slipper Sign.

Naraynsingh spoke on Thursday at the Eric Williams Medical Science Complex at an event held by the Universities of the West Indies (UWI), Trinidad and Tobago (UTT) and Southern Caribbean (US.)

Diabetes often cannot be detected by feel, as the foot becomes anaesthetised due to the death of nerves (neuropathy). In some cases, one cannot see any damage to the foot as the skin looks perfect, even as internally the flesh has rotted away into puss and gangrene in what Naraynsingh dubbed “The Rotten Zaboca Syndrome.”

He implored people who notice something wrong with their feet not to try ineffective home remedies such as potions and aloes, but to seek medical care.

He showed photos of the feet of patients who lacked sensitivity. “These are rat bites. Rats had been eating his foot,” he said of one man. “This lady ‘cooked’ her foot, but she didn’t know. A diabetic should not wash in hot water.” Another patients foot contained 500 maggots, he told shocked guests. “This was a good thing as maggots feed on dead flesh and help clean the foot. There’s even something called Maggot Therapy.”

He later told Newsday, “We have doubled our amputation rate in the last 30 years. Twice as many people are losing feet now that 30 years ago. We are losing more than one limb per day, nearly 500 per year about the same as the country’s murder rate.”

Naraynsingh lamented the “extraordinarily high” cost of amputations. “It costs $200,000 per amputation. If you lose 500 limbs that is $100 million, just in amputations alone. Now that’s not counting what takes place in the private sector; that’s the public health service. So actually the diabetic foot is a lot more expensive than $100 million.”

Naraynsingh added that for every limb lost two amputation, four limbs are saved by surgery. Calculating some 2,500 surgeries per year in total (limbs saved and limbs lost) each costing $200,000, he said, “So the actual cost is about $500 million per year.” By far most surgeries are done in the public not private health sector, he said.

Naraynsingh also considered the cost of surgery to the patient’s family, that is the cost of having to have someone stay home to help the recovery. “So it really is a national disaster. It’s something that for some reason we haven’t really addressed.” He urged patients to seek early medical care, not use home remedies. Naraynsingh said successive administrations had not addressed diabetic foot as a national issue, despite the huge cost of $500 million per year in surgeries alone.

Diabetes UK lists risk factors for getting diabetes as an unbalanced diet, lack of activity, lack of sleep, stress, smoking and alcohol. Healthline said before diabetes is diagnosed, for a period blood-sugar levels are high but not high enough to be registered as diabetes. This is known as pre-diabetes. Patients should use this period to motivate themselves to lifestyle changes.