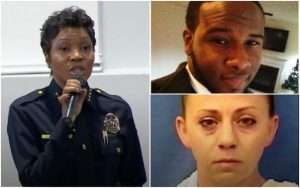 (WFAA) — The public still has a lot of questions about the shooting death of Botham Jean, including: Why has Dallas police officer Amber Guyger not been fired?

That issue was brought up Tuesday night at a town hall meeting at Paul Quinn College, where Chief Renee Hall took questions from the audience and asked for patience and trust.

Community members asked why the Jean case – in which Guyger fatally shot the 26-year-old in his apartment, saying she mistook the unit for her own – was transferred to the Texas Rangers and why Guyger was not arrested the day Jean was killed.

Hall asked the community to be patient and to allow investigators to do a complete investigation, including talking to more potential witnesses. She said the community talks about not trusting DPD and then criticizing the move to bring in an outside agency.

But it was clear there was a lot of frustration, and attendees still wanted to know why Guyger has not been fired.

“I can’t do that because there are both local, state and federal laws that prohibit me from taking action,” Hall said. “There are civil service laws we have to adhere to.”

Justin Moore, a civil rights attorney was a panelist at the meeting and was surprised by the Chief’s comments.

“I was completely mystified, and I really didn’t understand where it came from last night. It seemed like Chief Hall might not have been well informed on the law,” said Moore.

The Dallas Police Department general orders do allow the chief to take action, saying, “The Chief of Police may circumvent all formal disciplinary procedures to render an immediate decision when it deems it necessary to preserve the integrity of the department.”

The general orders are the policies that officers have to follow and are governed by within the department.

It was unclear what laws chief Hall was referring to, but she promised she would release copies of the laws.

Police chiefs across the state and in Dallas have fired officers under criminal investigation. An internal investigation is typically conducted, but the chief can order that process to be expedited.

Officer Guyger is allowed due process which means an internal investigation is typically conducted.

The Dallas Police Department has fired other officers while under criminal investigation including Amy Wilburn who shot a man in his car and Cardan Spencer who shot a mentally ill man standing in street.

“There is nothing that prevents a police chief from firing somebody on the spot or at least launching an internal affairs investigation,” said Moore.

Dallas County District Attorney Faith Johnson who now has the criminal case said it’s up to DPD to make firing decisions. She says her public integrity unit is focused on gathering evidence to give to a grand jury.

“I am committed to getting to the truth. We will get to the truth, and the truth will be presented to the grand jury in this case,” said Johnson.

WFAA asked the Dallas Police Department the laws Chief Hall mentioned. They did not provide us with any.

They did provide us with the same general order we mentioned in our story and added. “General order 508 refers to the Police Chief’s ability to circumvent the formal disciplinary procedures not the investigative process.”

They also provided a copy of the city’s civil service rules. WFAA asked Dallas Police if the Chief has launched an internal affairs investigation. They did not respond to that.

Editor’s note: In response to the previous headline in this story “Dallas chief says she can’t fire Amber Guyger over Botham Jean, but DPD general orders say otherwise,” Dallas police shared this answer to a community member’s question and to why Officer Guyger had not been fired: The question from the community member was: “we want to know why this woman has not been fired, can you at least tell us that?”

Chief Hall responded: “Because of federal, state, and local laws surrounding our force and the police officer. Civil service laws, there are things we have to do as an agency that are required. I can’t just supersede policy just because people want me to.”