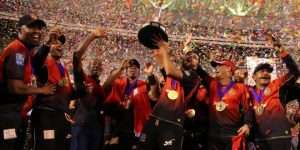 Port of Spain, Trinidad. 17 September 2018: The Hero Caribbean Premier League (CPL) have announced the “CPL All Stars” team of the tournament for 2018. The team was selected by Tom Moody, Mark Butcher, Daren Ganga, Ian Bishop, Danny Morrison and Michael Slater.

The team features three Windies players aged 25 and under in Rovman Powell (330 runs), Shimron Hetmyer (440 runs) and Oshane Thomas (18 wickets), all of whom have had an outstanding tournament in 2018.

Experienced Caribbean cricketers Andre Russell (163 runs and 14 wickets), Kieron Pollard (330 runs and four wickets) and Darren Bravo (353 runs) are also in the side. The overseas players that have made it into the team are Colin Munro (567 runs) and Glenn Phillips (457 runs) of New Zealand, Imran Tahir (16 wickets) of South Africa, Fawad Ahmed (22 wickets) of Australia and Ali Khan (16 wickets) of the USA.

Tom Moody, Hero CPL’s Director, International Cricket, said: “We have seen some outstanding performances in this year’s Hero CPL, but what has stood out is the emergence of young local talent. The performances of both Hetmyer and Thomas have been a highlight of the tournament, they are both set for a bright future with the Windies.”

The full team of the tournament is as follows:

ABOUT THE HERO CARIBBEAN PREMIER LEAGUE:

First started in 2013, the Hero Caribbean Premier League (CPL) is a franchise-based T20 format cricket tournament that combines two of the most compelling aspects of Caribbean life – dramatic cricket and a vibrant Carnival atmosphere. Combining broadcast and digital viewership over 197 million fans watched the 2017 season to make it one of the fastest growing leagues in world cricket. Trinbago Knight Riders are the current Hero CPL champions and the other competing teams are Barbados Tridents, Guyana Amazon Warriors, St. Kitts & Nevis Patriots, St. Lucia Stars and Jamaica Tallawahs. This year’s tournament takes place 8 August to 16 September 2018. For further information visit www.cplt20.com.