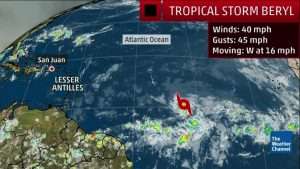 As of 2:30 p.m. ET Thursday, Beryl had winds of 40 mph and was moving to the west at 16 mph. It was located about 1,330 miles east-southeast of the Lesser Antilles, a chain of islands in the eastern Caribbean Sea.

The storm should fall apart by the time it reaches the Lesser Antilles. That’s due to strong wind shear, dry air and dust, which should all combine to weaken the system, AccuWeather said.

“Upper-level winds will become hostile well before the system approaches the Lesser Antilles this weekend,” according to Weather Channel meteorologist Jonathan Erdman. “These shearing winds should rip the system apart. Dry air is also plentiful near the system and will likely play some weakening role.”

Still, the remnants of the storm should bring locally heavy rains and gusty winds to portions of the U.S. Virgin Islands and Puerto Rico on Sunday and Monday, the hurricane center said.

A separate storm could develop off the U.S. East Coast over the next few days, but isn’t likely to directly impact land.

Following Tropical Storm Alberto, which developed during Memorial Day weekend, there were no tropical storms over the Atlantic basin during June for the first time since 2014, AccuWeather reported.