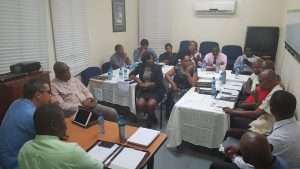 The joint meeting was undertaken by both parties to discuss national health issues – the current situation and new initiatives in which the overall delivery of healthcare services can be improved using a collaborative approach.

Held at the General Hospital, both parties held open discussions on key matters including but not limited to; service delivery, mental health, managing human resources, new initiatives within the health sector, facilities upgrades, new and emerging technology and customer services.

During the two hour long meeting Union officials were delighted to learn of the many new initiatives especially as it relates to new and emerging technological advancements currently being undertaken throughout the public healthcare system, and how this will be used to improve the delivery of health care and better patient outcomes.

Discussions surrounding mental health, health and safety and emergency response services, were discussed at length with both parties who pledging to work closely to address those matters which they agreed are of national importance.

Following the meeting the stakeholders conducted a tour of the hospital’s new wing where they took the opportunity to engage the contractor and health officials on the adherence to health and safety guidelines, the layout of the facility and the intended services that would be provided at the new wing.

On completion of the tour Mr. James told the Government Information Service (GIS),  the facility, looks good, very spacious and from all indication it would be a top of the line facility”.

He added that having the right infrastructure, the proper maintenance systems, human resource and the service that would and should be offered must dove tail together , so that the best health care can be provide for the citizens of the country.

James commended the MOH for engaging the (GTUC) at the earliest stage adding that anything (we) intend to do as a country, collaboration and consultation is necessary since its augurs well for overall development and total buy-in and the GTUC welcomed the initiative.

Permanent Secretary in the Ministry of Health, Social Security and International Business, Pauline Peters also  described the meeting as positive and productive.

She said it’s the first in a series and given the positive comments and suggestions that came out of the discussions, the Ministry would re-engage the (GTUC) on specific  issues in order to chart the way forward.

“Certainly this would be a phased approach to addressing recommendations coming out of the meeting. There were good suggestions as it relates to mental health, the national emergency response services, and hospital services and the like. So we are going to  itemize those specific thematic national issues, develop timelines, as well as an action plan and then re-engage the (GTUC) so we can sit, go through each one in a structured manner.

Meanwhile, although the meeting was hailed as successful and had representation from all of the major unions, there was no representation from the Public Workers Union PWU, which interestingly represents the largest proportion of healthcare workers on island.