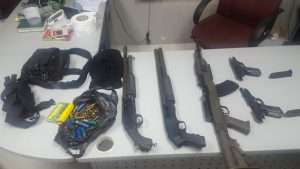 The leadership of the Masjid ul Mattaqeen has distanced itself from the discovery of arms and ammunition found hidden in the ceiling of its mosque at Monroe Road, Cunupia, on Thursday.

In a statement the leadership stated that members were stunned by the find and did not condone any form of illegal activities.

The release stated that at around 8:30 a.m. workmen were conducting general maintenance on the masjid’s compound when several black garbage bags were discovered hidden in the ceiling of an upstairs prayer area.
On further inspection, the release stated, the bags were found to contain five firearms – two pistols, one rifle, two shotguns – and several rounds of assorted ammunition.

The masjid stated that the Chaguanas police were contacted and took possession of the find.

“We as the administrators of the Mosque requested the police officers who attended to conduct a thorough search of the entire compound to ensure that no other guns, ammunition or other illegal items were secreted on the premises. We are advised by the Police that no additional illegal items were found. On behalf of the members of the Masjid we wish to thank the officers who attended promptly from the Chaguanas Police Station for their professionalism and courtesies extended to us during this Holy Month of Ramadhan,” it stated.

The leadership stated that the illegal firearms and ammunition found inside the masjid were secreted there by persons unknown to them. It also stated that the leadership does not condone any form of illegal activity.
“Those persons who planted these illegal items in our place of worship did so without the knowledge of the spiritual and administrative leaders of the Masjid and our membership,” it stated. 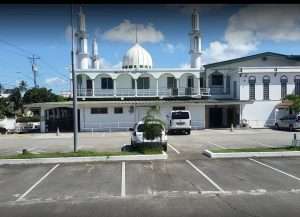 The masjid stated that it would assist and co-operate with the police in every way possible to discover the identities of those person or persons who are responsible for bringing illegal guns and ammunition into the place of worship.

It further stated that there was no formal security arrangement in place at the masjid where members are engaged in fellowship, pray and social activities. “The Masjid is a place where families, friends and neighbours congregate particularly in the holy month of Ramadhan and we are truly stunned at today’s find.

This Masjid roundly condemns any form of illegal activity and more so such illegal activity that involves the use of arms and ammunition against our citizens in these increasing dangerous times,” it stated.